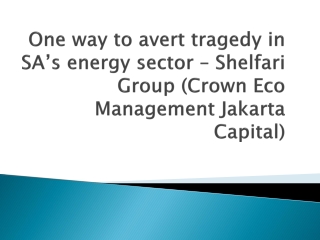 OF ALL Shakespeare’s meticulously crafted characters, King Lear is arguably the most complex — a man flawed by layers of rage juxtaposed by the burden of guilt. At his death in Act V, Shakespeare’s critics argue that the magnitude and beauty of this complicated man is not measured in a contrived, flowing obituary, but in the simplicity of swift death itself. The name O’Flaherty may appear to be the only faint link between Celtic mysticism and Megawatt Park, the site of Eskom’s headquarters in Sandton. But long before the procurement processes at the Medupi coal-fired power station were revealed to a collective groan of public disbelief, weak leadership had characterised the national power utility, with successive CEOs persistently applying that odious Kumbaya-esque rhetoric to explain their excessive bonuses in a culture that was blatantly rewarding failure with the proceeds of destructive economic exercises. Tragedy and the Tragic Hero - . aristotle, the ancient greek philosopher, identified the main characteristics of tragedy.

What Defines Tragedy? - . where does tragedy come from?. the greek philosopher aristotle first defined “tragedy” in

Introduction to Greek Tragedy - . “it’s all greek to me…”. background of greek tragedy . origins tragedy is

A Tragedy! - Understanding the tragic elements of macbeth . a tragedy!. common understanding. there is one simple (and

The Tragedy of Hamlet - . the tragedy of hamlet. this tragedy was written by shakespeare at an uncertain date between

Understanding Tragedy - . background for antigone by sophocles. tragedy. a play depicting serious and important events in