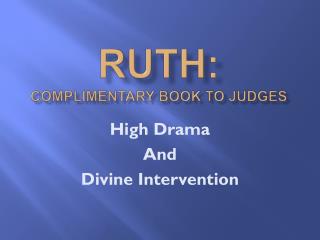 RUTH: Complimentary book to Judges. High Drama And Divine Intervention. Title of the Book. Both the Hebrew, the Greek and the English title of this book are the same It is named after the key character of the book The name "Ruth" is not a Jewish name

Judges &amp; Justices - . psci 2481. questions. who is the president of the united states? who is the chief justice