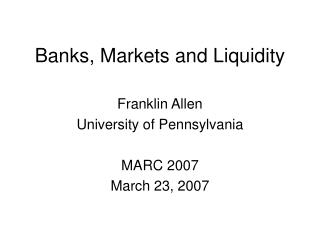 Central bank to have additional tool for liquidity management

Risk Management in Banks : An Introduction - . by a v vedpuriswar. june 14, 2014. the rise of risk management. evolution

Liquidity Risk - : and are there lessons to be learnt from northern rock? black holes and other disasters!. liquidity

Liquidity and Reserve Management : Strategies and Policies - . 11- 2. liquidity. the availability of cash in the amount

The liquidity in the banks - . zuzana kunzová. what is liquidity?. liquidity represents the capacity to fulfil all