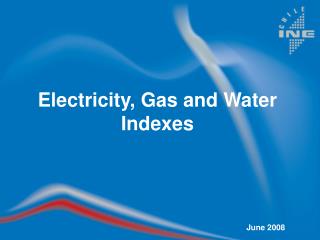 Electricity, Gas and Water Indexes. June 2008. Electricity Statistics. A survey on generation and distribution of electricity is carried out since 1990 by INE. Electricity. Generation. Distribution. Hydraulic Combined Cycle Other Thermal. Residential Commercial

Gas and Electricity Suppliers - If you are not satisfied with your energy supplier, you are free to change your service

Implementation of the Electricity and Gas Directives - . - 2005 report. disclaimer: the views expressed in this

WATER AS GAS - . what causes sponges to go from…. wet to dry?. it’s caused by a little thing called…. evaportation

Indexes - . if you often search a table or sort its records by a particular field, you can speed up these operations by

Indexes - . a heap file allows record retrieval: by specifying the rid , or by scanning all records sequentially

Indexes and Scales - . why use a “composite” measure of a concept? there is often no clear “single” indicator

Indexes - . the average weekly earnings of an australian employee. multiplying or dividing all the values in a time