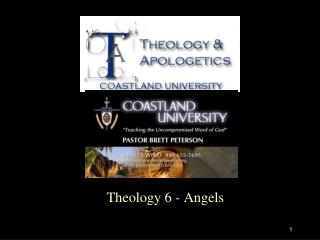 Theology 6 - Angels. Let’s dig right in and talk about Angels. What are some myths about angels?. Have you ever seen an Angel?. How about Guardian Angels?. Psa 34:7 The angel of the LORD encamps around those who fear Him, And rescues them. . Day 6-Covenant Theology - . review before quiz. what are the 3 major tenets (sine qua non) of dispensationalism

Angels - . game time!. * rules of the game *. give an index card and pencil to each child as they arrive. ask them to

ANGELS - . angels explained by children i only know the names of two angels, hark and harold. -gregory, 5. angels

ANGELS - . are angels male, female, neither? why are they mentioned as male, and depicted as female?. most pictures -

Angels - . what is the need for contact between man and

Angels - The messengers of god. angels. etymology. angel has come from late latin angelus , which in turn has been

Angels!!! - . by:estephanie. angels took care of jesus. everybody has a gardeen angel. there is baby and kid angels.

Theology - . aim of tonight is to help you understand the nature of the bible and its importance as the handbook for