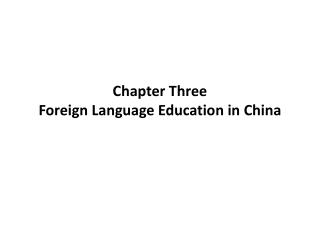 Chapter Three Foreign Language Education in China. The history of China is not only a history of the Chinese people but also a history of its communication with foreign peoples, especially with those in the West. – Tian Bing. Introduction The Historical Background for FLT in China Foreign Investment in China - . presentation outline general background who are investors when, where and how. new

Foreign Language in Government. - Foreign language in government. jobs in the central intelligence agency. there are

The Value of Foreign Language Education - . foreign language benefits:. our world our nation our state our community our

Three China - . today we are telling you about the three chinese ph ilosophies. confucianism. confucianism is based on

Education in China - . national consortium for teaching about asia study tour july,2004. if you think about education in