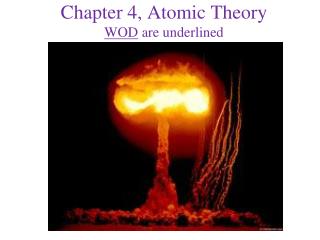 Chapter 4, Atomic Theory WOD are underlined. Each block is an element. Learn the name and symbol for elements 1-20 (quiz on Friday). Read off the names of the 20 and symbols. Dalton’s atomic theory. 4 parts to describing an Atom. Dalton was not correct but “Close Enough to Count!”.

The good and the bad of Loans against Properties - Hdfc home insurance, insure your home with hdfc protect you home with

Use of comma after introductory participial phrase - Day 1. often called “the voice of scotland robert burns was

Note-taking - . reasons for taking notes. help you remember something help in planning of a project or piece of writing

For this presentation only write what is underlined in your worksheet title : THE MOON - . the moon. facts about the

Functional Anatomy of the Prokaryotic Cell - . prokaryote means, “before the nucleus”. prokaryotic cells are simpler

History of Atomic Theory - . a look at early models of the atom…. historical timeline. democritus model (403 bc). all

History of Atomic Theory - . atomic theory timeline. democritus: 460-370 b.c. • 1. there are basic elements from which

ATILIM UNIVERSITY IE 504-Simulation Paper 3A Introduction to Simulation - . gizem alagoz. introduction. one of the most

AP Biology Ch. 3 - . water and the fitness of the environment. the molecule that supports all of life. water is the