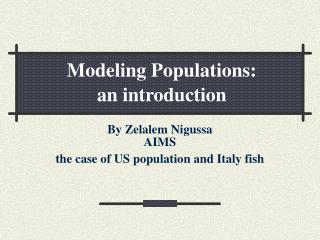 By Zelalem Nigussa AIMS the case of US population and Italy fish. Modeling Populations: an introduction. Population Dynamics. Studies how populations change over time By Zelalem Nigussa AIMS the case of US population and Italy fish - . modeling populations: an introduction. population

Case Study: Italy. What is population distribution like in Italy ? - . l.o: to be able to produce climate graphs and draw

Fish population status? - . gilutungan island mpa. managers need to know what is going on in the area being protected.

Fish Population Assessment - . how many fish do we have?. estimating population size. 1) plot method 2) mark and

Aims of this Case Study - Vv40: committee on verification &amp; validation for modeling &amp; simulation of

US Population - . the usa is a multi-ethnic society . it is so called “a melting pot”. the term “the melting

Of Fish and Men The Case of Tilapia and NORAD

By Abbi Zelalem, Tom Dickinson and Hao Do - . tom. what is the issue?. our issue is about gaming. we will be talking

US Fish and Wildlife Service - . us fish and wildlife: authorities. compacts of free association republic of palau

US Fish and Wildlife Service - . focal species strategy for migratory birds. a blueprint for the future of migratory

Fish and Wildlife Population Ecology: The End Game… - . okaloosa darters… how are they doing?. choctawhatchee bay

Fish and Wildlife Population Ecology: The End Game… - Okaloosa darters… how are they doing? choctawhatchee bay

BARCODE AND FISH DIVERSITY IN AMAZONIA: THE CASE OF THE ELECTRIC FISH TRIBE STEATOGENINI - Potential of dna barcode in