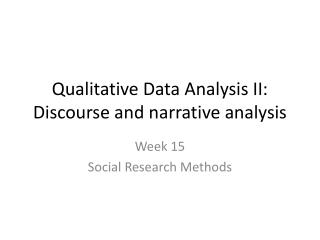 Qualitative analysis 2 – analysis of use of language - . structure of this session theoretical origins of discourse

What is … Discourse Analysis? - . stephanie taylor the open university. what is discourse analysis?. (1) the study of

Analysis of Qualitative Data - . planning research chapter 9. analysis requirements. it requires that you make your own