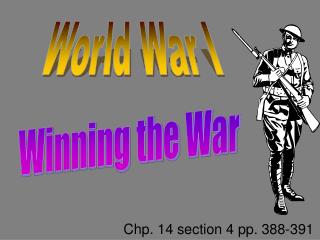 World War I. Winning the War. Chp. 14 section 4 pp. 388-391. 4. Setting the Scene*. By 1917 most of Europe instead of standing behind war heroes were criticizing the leaders that wasted so many lives. “You smug-faced crowds with kindling eye Who cheer when soldier lads march by