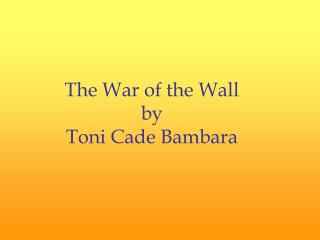 The War of the Wall by Toni Cade Bambara The War of the Wall by Toni Cade Bambara. What you need to know!. In the 1960’s, some African-American artists started a “wall of respect” movement. The artists worked to create special places by painting murals on walls in their communities as symbols of their respect for the neighborhoods.

The War of the Wall by Toni Cade Bambara

THE WALL IN ARCHITECTURE - W a l l. the wall in architecture. sergio gil jesÚs cisneros. table of contents. w a l l.

The Great Wall of China - . 4,000 miles long . you can see it from space. the wall itself is actually in sections and was

WALL - . wall. wall is a continuous, usually vertical structure, thin in proportion to its length and height, built to

Custom Wall Decals - This presentation is all about the products delivered by the “design with vinyl”. we specialize

Assessment of Radiologists’ Performance with CADe for Digital Mammography - . elodia b. cole, ms medical university of

Toni Morrison’s The Bluest Eye Lecture 1 - . ‘the best art is political and you ought to be able to make it

Different types of wall decal - Svg salon offers the largest collection of wall decals at lowest costs. our decals are

wall stickers - Wall sticker is a kind of sticker produced with various ready-made patterns by designer. it only need to