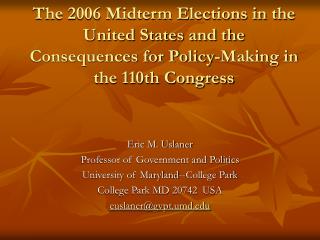 The 2006 Midterm Elections in the United States and the Consequences for Policy-Making in the 110th Congress. Eric M. Uslaner Professor of Government and Politics University of Maryland--College Park College Park MD 20742 USA euslaner@gvpt.umd.edu.

The Mathematics of Elections Part I: Apportionment - . mark rogers (a.k.a. the mad hatter). the mechanics of elections.

CTP 225 EER Park Example - . a park has hired you to create a database to store information about the park. based on the Conservative Revolution - . the rise of the modern republican party, the politics of new federalism, and the

United States Regions - . essential question: how do people interact with the environment and what are some of the