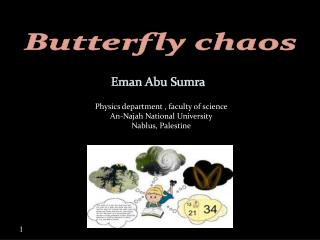 Chaos Theory &amp; The Butterfly Effect - . as demonstrated in the one of the most popular drama series on

Butterfly - . lifecycles. stage 1: the egg. butterfly moms lay eggs on leaves. they c an lay up to 300 eggs the egg stage

Butterfly - . sean and caroline. about insects. the insects are the largest group of animals in the world. insects

Chaos - . linking chaos in the model to chaos in the brain. kaolin fire – http://erif.org. a quick look at neurons.

Butterfly - . like the child pose, the butterfly is a relaxation pose that helps the union of the body and mind. can help