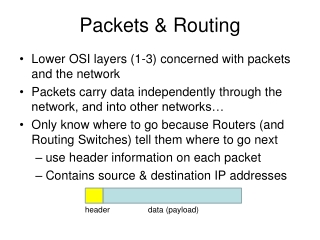 Packets & Routing. Lower OSI layers (1-3) concerned with packets and the network Packets carry data independently through the network, and into other networks… Only know where to go because Routers (and Routing Switches) tell them where to go next use header information on each packet Forwarding and Routing IP Packets - . don't ask for a light load, but rather ask for a strong back. - unknown.