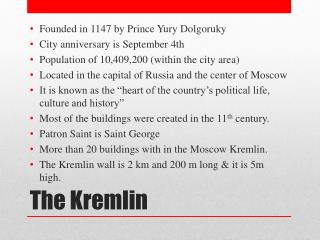 F ounded in 1147 by Prince Yury Dolgoruky City anniversary is September 4th Population of 10,409,200 (within the city area) Located in the capital of Russia and the center of Moscow It is known as the “heart of the country’s political life, culture and history” THE KREMLIN - . the kremlin is the historical, spiritual and political heart of moscow and the city's most famous sight.

the Kremlin … Moscow, Russia - &quot; i pledge allegiance to the flag of the united states of america, and to

The Armoury Chamber in The Kremlin - . jewellery. the ring. the necklace. the brooch. the earrings. the bracelet . o ld