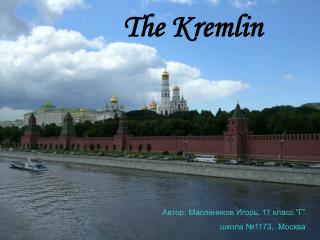 The Kremlin - F ounded in 1147 by prince yury dolgoruky city anniversary is september 4th population of 10,409,200

THE KREMLIN - . the kremlin is the historical, spiritual and political heart of moscow and the city's most famous sight.

the Kremlin … Moscow, Russia - &quot; i pledge allegiance to the flag of the united states of america, and to

The Armoury Chamber in The Kremlin - . jewellery. the ring. the necklace. the brooch. the earrings. the bracelet . o ld