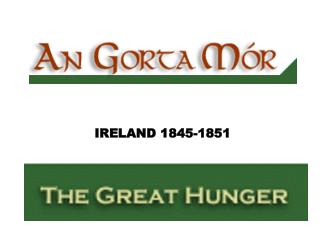 IRELAND 1845-1851. Mother IRELAND. “IRELAND remains a canvas. on which many of the broad brush strokes of the modern world’s formation – imperialism, colonialism, nationalism, revolution, emigration, democratization, et al. – can be fruitfully studied and examined.”

Statehood:1845-1861 - What is statehood?. statehood is the same as annexation. annexation is the process of one country