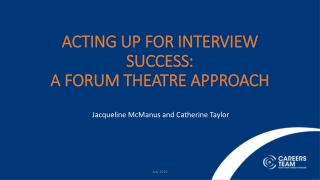 The Jesuit Theatre - . in the seventeenth century many german schools , protestant and catholic, presented plays for

Theatre in the Dark Ages - . why is it called the “dark ages”? this is the time period after the fall of the roman

The Musical Theatre - . chapter nine. music theatre is antirealistic &amp; presentational. all drama has always been

The Theatre: - . a trip through time. primitive theatre. theater first came from primitive societies through dance.

Math in Theatre - . applications of conics to the building of amphitheaters; and theatrical performances that use math.

Careers in Theatre - . from onstage, to backstage, to the house. playwright. director. assistant director. stage manager.

Theatre in the Elizabethan Age - . shakespeare and the globe. the elizabethan age. a brief period of largely internal

Mask in Theatre - . masakhaمَسَخَ be transfomed. put on a mask and anything is possible. suddenly you can move,

The Globe Theatre - . by seth glass english 12 angie lewis. the history. 1599: the globe theatre is opened on bankside -

The Globe Theatre - . by: baker parker, kendall adams, clay mosier, and alex horton. it was built in 1599 by

The Theatre in Shakespeare’s time - . eng1d1. the first proper theater opened in 1567 – “the red lion” most plays

The Globe Theatre - . restored. the exterior. looking down. entrance at night. detail of thatched roof being built.

Poetry in Theatre - . semester final december 16, 2013 5 th period. what is poetry. poetry is an imaginative awareness of