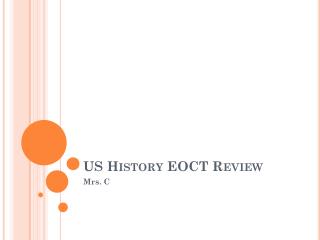 US History EOCT Review. Mrs. C. SSUSH1 The student will describe European settlement in North America during the 17th century.

EOCT Review - . #7 biology/mrs. mcclain 35 questions. 1. in which structure would you find a nucleus ?. a. bacteria cell

SSENI1, SSEIN2, and SSEIN3 EOCT Review - . ssein1 the student will explain why individuals, businesses, and governments