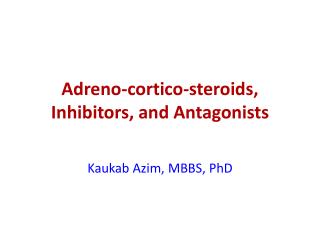 Adreno - cortico - steroids, Inhibitors, and Antagonists. Kaukab Azim, MBBS, PhD. Drug List. Learning Outcomes. By the end of the course the students should be able to Explain the molecular mechanism of action of corticosteroids Accessibility to Inhaled Cortico-steroids among Adults with Chronic Asthma: - An impact of the universal health care

Agonists and Antagonists - . agonists interact with receptors to produce the same cellular effect that is seen with the

Androgens agonists and antagonists - . what are androgens ?. steroid derived from cholesterol found in males and females