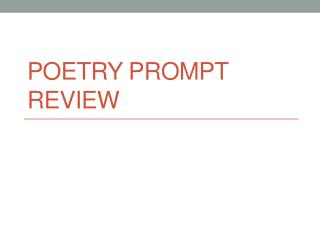 Unit6 - . cultural background. 1. history of poetry some of the earliest poetry is believed to have been orally recited

Poetry - . what makes poetry different?. poetry booklet. creative project by the end of this poetry unit, students will

Poetry - . what is a poem?. a poem is a fishing net stronger than what it catches the sound of nature in a capsule like a

Poetry Terms - . free verse. poetry that does not have a regular meter or rhyme scheme. this poetry imitates the natural

Poetry - . what is poetry?. poetry is…. writing that formulates an imaginative awareness of experience in language

Introduction to Poetry - . poetry is arguably the purest form of writing. poetry is a sense of the beautiful;

Literature Poetry Revision - . half caste. what is the main tone of the poem? the poet is angry but uses an

Basics of Poetry - . “introduction to poetry,” literary terms, how to read a poem, and helpful websites.

Poetry - . spring has sprung, the grass has riz, i wonder where the birdies is?. aims. to exemplify the role of poetry in

POETRY NOTES - . poetry is…. a type of literature that expresses ideas and feelings, or tells a story in a specific

What is Poetry ? - . poetry. expresses the music and lyricism of language. teaches us the richness of language and its

Basics of Poetry - . “introduction to poetry,” literary terms, how to read a poem, and helpful websites.

Creative Writing - . the world of poetry. enter. poetry. true or false? all poetry has to rhyme . click on the answer