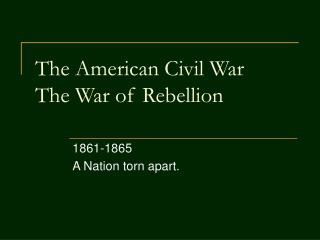 The American Civil War The War of Rebellion The American Civil War The War of Rebellion

Prelude to the Civil War - . ssush8a explain how slavery became a significant issue in american politics; include the

The civil war - . by: aidan gist. nurse. clara barton was a nurse during the civil war, and she saved many lives. a bad

BACON’S REBELLION - . the british n. american colonies virginia, 1676. original 13 colonies. picture it…. you are an

The American Civil War, 1861 -1865 - . us history. john brown and abolitionists. which union officer put down the john

American Civil War - . by: camila eléspuru &amp; inés catalano. date. the american civil war was a war between the

III. The Rebellion Era - . a. i have no idea what that word means… rebellion vocabulary 1. salutary neglect – a

The African-American Freedom Struggle from the Civil War to the Twenty-First Century - . ruprecht-karls-universität

THE AMERICAN CIVIL WAR - . 1861-1865. this powerpoint is hosted on www.worldofteaching.com please visit for 100’s more