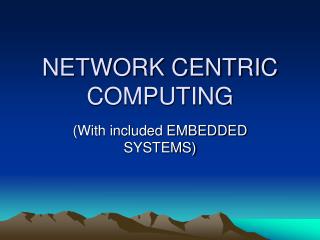 NETWORK CENTRIC COMPUTING. (With included EMBEDDED SYSTEMS). Network Centric Computing. A Web Browser to provide a Universal Client Users have a consistent and Familiar User Interface A Browser can launch many types of applications and read many types of documents