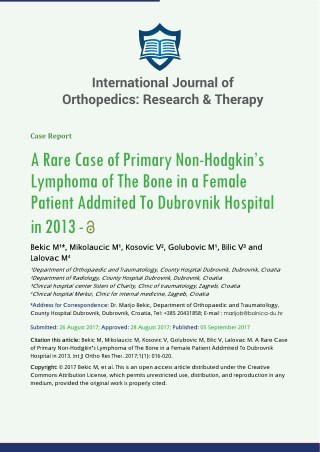 Primary Non-Hodgkin’s Lymphoma of The Bone (PLB) is rare entity [1,2,3]. Patients generaly present with localised bone pain, soft-tissue swelling or palpable mass. Pathological fracture of the proximal femur and humerus secondary to soft-tissue tumors is well documented in the literature. Lymphomas presenting primarly at these sites with pathological fracture is unusual. A review of the world literature shows that the incidence of the skeletal manifestations from NHL is less than 5%, and in all these cases, bony involvement was reported many years after presentation of the primary cancer. Histopathologically, PLB usually represents diffuse large B-cell lymphoma. We report 56-year-old female patient case report of Primary non-Hodgkin’s limphoma of proximal femur and proximal femur with pathological fracture and management. In january 2014. A 56-year-old woman was diagnosed with stage IV B primatry large-cell diffuse primary non-Hodgik’s lymphoma. After one year of initial diagnostic procedures and chemotherapy with rituximab together with cyclophosphamide, vincristine, procarbazine, and prednisolone she achieved a total response.

Total en bloc Spondylectomy - . if not for primary malignant tumors, for what else then?. sohail bajammal, mbchb, msc,