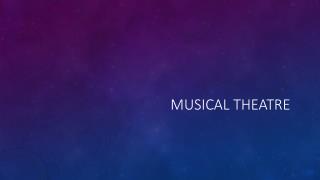 Musical Theatre. What is a musical and what are the terms? . Musical Theatre-a type of entertainment containing music, songs, and usually, dance Production Number- a large-scale performance within a musical show, usually combining both song and dance

THE MUSICAL CULTURE OF EUROPE - . how does music communicate ideas of national identity?. we will examine european folk

Survey of Dances in Musical Theatre - . hip hop. origins of hip hop: when. 1970s: became widely known after the first

Musical Elements - Texture the effect of multiple voices or instruments, melodies and harmonies and interact with each

Musical Elements - D y namics. pitch. silence. duration. dynamics is how loud or soft a piece of music or song is . it

PREPARING A MUSICAL THEATRE AUDITION - . by: yasaman nouri. find an audition. so let’s say you’re auditioning for the

National 3 Musical Periods and Styles - . concepts. musical. musical. a musical play which has speaking, singing and

The Golden Age of Musical Theater - Where we are coming from:. the great depression is in its end stagesirving berlin has

Brief History of Jazz &amp; Musical Theatre Dance - . by wendy oliver adapted by sara macinnes for use with dance 11