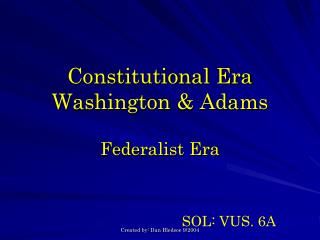 SHAPING A NEW NATION - . 9. feudalism is important to the development of constitutional government because it .

Getting It Right the First Time Coding and Documentation - 2013 steve.adams@ingaugehsi - Steven allen adams. getting it

The U.S. Constitution and the New Republic - . themes. the first constitution’s achievements and problems the

The Constitutional Era - . 1781-1789. what is a republic?. a representative democracy. how does a republic work?. the

With your host Mr. Bass ! - . jeopardy. choose a category. you will be given the answer. you must give the correct

CHAPTER 2 THE CONSTITUTIONAL SETTING - . purposes of constitutions. legitimacy giving legitimacy to the government is the