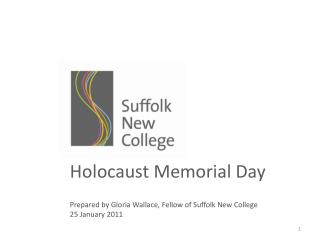 Jewish Terms - . sabbath / shabbat the 7 th day of the week is the sabbath or shabbat (saturday). god rested on the

Surviving The Holocaust - . how did people react to the holocaust? how would you have reacted? let’s look at three

CHILDREN OF THE HOLOCAUST - . the nazis thought killing the kids of “unwanted” or “dangerous” groups of people.

The Holocaust - . andrea richardson &amp; alicia smith. adolf hitler. “once i really am in power, my first and

The Holocaust: Uncovered - . kayla bear. let’s see what you already know about the holocaust!. start the quiz. during

Jehovah’s Witnesses - . beliefs , customs , spread in the us and the world, situation in germany &amp; the

Holocaust Memorial Day - . sunday 27 th january 2013. “the one who does not remember history is bound to live through

The Holocaust - . eq: how is genocide and other acts of mass violence humanly possible? 4/18. warning:. today’s lesson

The Holocaust Majority of information presented from the United States Holocaust Memorial Museum - . in the last months

The Eight Stages of Genocide and The Nazi Holocaust - . extermination of the jews. the 8 stages of genocide.