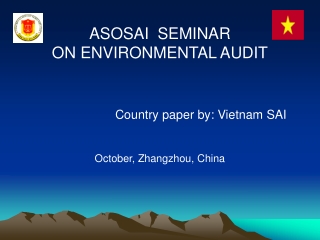 Chapter 33 WAR IN VIETNAM - 2. objectives:. why did china and france want to control vietnam?why did the united states

In The Name Of GOD - . islamic republic of iran’s country report: evaluation of current situation of money laundering

AUDIT TO DETECT FRAUD AND CORRUPTION: EVALUATION OF THE FIGHT AGAINST CORRUPTION AND MONEY LAUNDERING - . the 10th asosai

The Geography of Vietnam - . vietnam is one of the ten countries that compose southeast asia it is bordered by china on

Vietnam War - . by jeanne hendricks. history of vietnam. the lineage of the vietnamese people the first people to inhabit

The Vietnam War and The Things They Carried - . tim o’brien. background: vietnam. began in 1946 when the vietnamese

Vietnam War - . vietnam war. vietnam had never been under its own rule china- ruled for hundreds of years france- ruled

The Vietnam Conflict: - . a history. map of vietnam. history of vietnam. fought to remain independent of foreign

Vietnam War - . long term causes. history of vietnam. long history of conflict with china china ruled from about 100 bc

Vietnam War - . i. early conflicts in vietnam. a. early control of vietnam. french take over 1883 france takes over