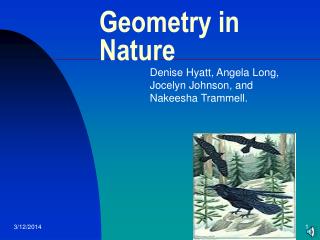 Geometry in Nature. Denise Hyatt, Angela Long, Jocelyn Johnson, and Nakeesha Trammell. Introduction. Discovering the link between geometry and nature is not a difficult task. Geometry is everywhere in the natural environment Nature’s Geometry: Symmetry and polygons in Nature - . symmetry can be found all around us. geometry in nature. by

LESSON 1 NATURE AND ESSENCE OF GEOMETRY - . geometry. &quot;measuring the earth“ is the branch of math that has to

GEOMETRY in NATURE The DNA of DESIGN Mark Rosenhaus, CKD - . nautilus shell fits into a golden rectangle and is the same

Geometry in Architecture - . lesson 1. geometry in architecture. terms asymmetry – not equally distributed on either

Geometry in school - . by lacy morse. c ircle. a circle is flat it has no vertices , edges or faces but this one does . s

GEOMETRY IN FLIGHT - . david webb. introduction . the purpose of this activity is to determine how the shape and size of

Geometry in Golf - . by: vanessa rennie 2 nd hour novak. point. a location, no size, represented by a small dot and named

GEOMETRY IN FLIGHT - . david webb. introduction. the purpose of this activity is to determine how the shape and size of a