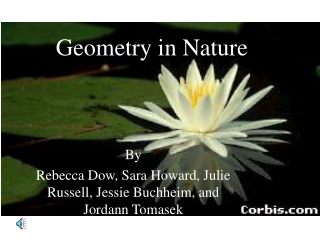 Geometry in Nature. By Rebecca Dow, Sara Howard, Julie Russell, Jessie Buchheim, and Jordann Tomasek. Symmetry. Definition-The preservation of form and configuration across a point, line or a plane. Transformations Types of Symmetry. Symmetry in Nature. Symmetry Can Be Found All Around Us.

Geometry - . concerned with questions of shape, size, relative position of figures, and the properties of space. geometry