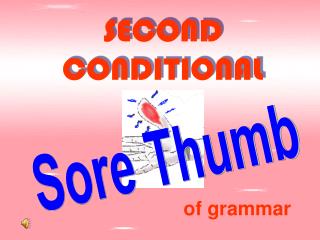 SECOND CONDITIONAL. Sore Thumb. of grammar. Contents. Form Usage Notes Alternatives to “If”. 1. Form. Ex : If I had much money, I’d buy a comfortable apartment . BACK. 2. Usage. Conditional Sentences Type II refer to situations in the present. An action could happen if the

Second Conditional - . if he won the lottery, he would travel around the world. if i saw a ghost, i would scream . if she

Second Conditional Classroom Feud - . game. we asked your classmates second conditional questions, can you guess their

Conditional Sentences ( General conditionals – facts ) - . (type 0). think about what happens in the following

Second Conditional - . the warehouse madrid upper-intermediate course. when do we use it?. we use the second conditional

Second Conditional : unreal or Hypothetical situations - . could. might. if+ simple past would + infinitive the if-clause

CONDITIONAL SENTENCES - . definition. if clause (a condition ) + main clause (a result ). if s/he doesn’t call me, i

CONDITIONALS - . zero conditional. if you don’t water flowers, they die . if you have a headache, stop watching tv. if

SECOND CONDITIONAL - . by mgr. Šárka jurajdová. vy_32_inovace_aj1r0105. situations for brainiacs. deal with the

The Conditionals - . by mark. introduction. what are the conditionals, and why the gobbledygook? first conditional your