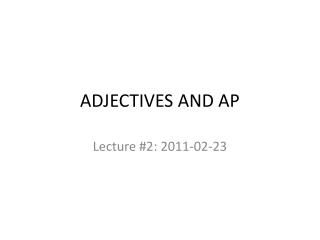 ADJECTIVES AND AP. Lecture #2: 2011-02-23. What have we done so far?. REVIEW. REVIEW – AP and ADJECTIVES. An ADJECTIVE PHRASE is a phrase headed by an ADJECTIVE. We analyzed ADJECTIVE PHRASES from several different perspectives: SYNTAX, MORPHOLOGY AND SEMANTICS

Notes to the text - . word learning booster. talk about friendship among schoolmates. learn to use indirect speech to

Adjectives of Special Declension - There are ten adjectives in latin that are called irregular, but they are declined

Adjectives: Positive, Comparative, Superlative - . in latin, as in english, adjectives are said to have three degrees:

Morphology - . chapter 3 – the grammar of english. morphology. inflectional morphology deals with changes in the form

Adjective Agreement - . what is an adjective?. a word that modifies a noun. a descriptive adjective is a word that

Making Use of Gerunds - . lesson 23 joseph c. blumenthal. present and past participles, as we have seen, are forms of

Adjectives in English Definition of adjective?

Adverbs - . adverbs modify verbs adjectives other adverbs quantifiers and whole sentences. they answer the questions how?