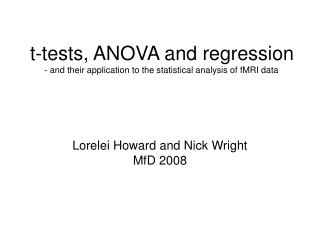 Lorelei Howard and Nick Wright MfD 2008 - T-tests, anova and regression - and their application to the statistical

THE LORELEI - Heinrich hein. the

Howard L. Dorfman December 9, 2008 - The compliance environment and grant process: oversight and response in the

Nick - I got into a ski accident and tore my mcl. people call me dimar because of my last name dimartino . nick. in the