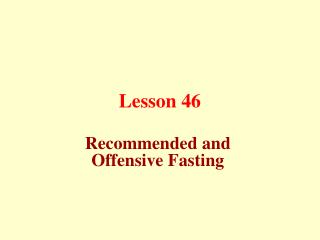 Lesson 46. Recommended and Offensive Fasting. Recommended Fasting. Days recommended for fasting throughout the year are: a) The day of `Arafah (for other than the pilgrim). b) The day of `Ashura’ and a day before it (tenth and ninth of Muharram). c) Six days in Shawwal.

Jesus Christ: The Lamb of God - . sacrifices of the old testament. pre-mosaical law offerings passover sacrifice was the

Lesson 47 Relationship between plants and animals - . all of the organisms in an ecosystem have interconnected

DO YOU WANT TO BE MADE WHOLE?

Desert Ecosystem Lesson 46 - . the desert ecosystem is hot and dry. living things in the desert have been able to adapt

You Are the Emergency Medical Responder - Lesson 46: disasters, terrorism and weapons of mass destruction. you are the

GCSE PE Year 10 Lesson 1 Skill - . skill aquisition. learning objectives: be able to explain what skill is. be able to

Who Is Jesus Christ? - . confirmed in the faith series b lesson 4. christ’s person (who he is). 1a. he is called god.

PURPOSE OF LESSON - The bible teaches jesus is the christ willie a. alvarenga “thou art the christ, the son of the

Lesson 9: The Resurrection of Jesus Christ - . i. the resurrection: at the heart of the gospel. h orrible death e mpty