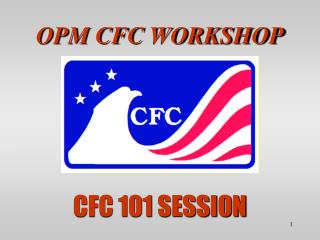 CFC : - Please take some time, and watch this short informative presentation about  cfcs and their effects on the

CFC Events - . why have a cfc event?. increase participation and dollars raised in the cfc motivate campaign workers

CFC Reform - Aims and objectives. a cfc regime that reflects the way businesses operate in a more globalised

DFW Metroplex CFC - . key worker training www.dfwmetroplexcfc.org. the #1 reason federal workers do not give??. “no one

CFC Children’s Ministry - . mission and strateg y. who we are…. we are an integral part of spiritual growth &amp;