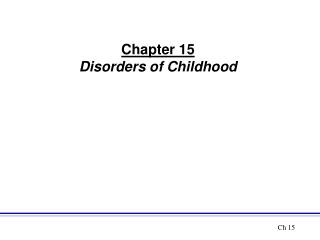 Chapter 15 Disorders of Childhood. Ch 15. Classification Issues. Distinguishing abnormal childhood behavior requires a knowledge from developmental psychology of what is normal for a child at a particular age or stage Disorders can be viewed as categories or on a continuum (dimension)

Chapter 15 –Psychological Disorders - . identify the criteria for judging whether behavior is psychologically