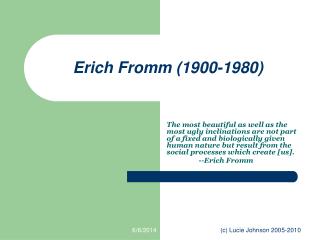 Erich Fromm (1900-1980). The most beautiful as well as the most ugly inclinations are not part of a fixed and biologically given human nature but result from the social processes which create [us]. --Erich Fromm. Fromm’s roots.

INTRO TO PSYCHOLOGY - . man is the only animal for whom his own existence is a problem which he has to solve. erich fromm