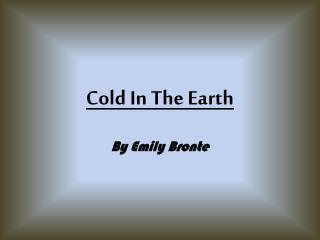 Biodiversity of amphibians in Yakutia – the most cold region of the Earth - . solomonov k . s. ¹ , sedalischev v

Birds in the Cold

In from the cold? - . community-based research and universities at the brink of a new era budd hall, director. knowledge,

Water in the Earth - . the water cycle. earth has been recycling its water supply for 4 billion years. 97.2% = ocean salt

The Earth in 2050. - The earth in 2050. climate change – will humanity follow the polar bear and the great barrier

The Earth in Motion - . our lithosphere is made up of many large plates – oceanic and continental the plates are moving

Earth in the Universe - . c reated by richele dunavent, esl teacher, sugarloaf. star. a star is like a big ball of fire

The Earth in Space

Earth in the Universe - . orbit. to orbit is to move around something in a circle. axis.  real or imaginary line on

Earth in the Universe - . the sun and stars appear to move in an arc across the sky from east to west . but in reality,