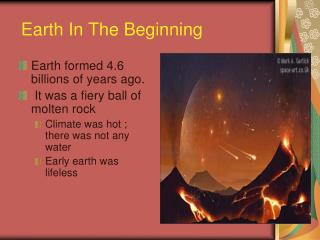 Earth In The Beginning Earth In The Beginning. Earth formed 4.6 billions of years ago. It was a fiery ball of molten rock Climate was hot ; there was not any water Early earth was lifeless. History of Life on Earth. Series of chemical events that produced the first living cell.

Earth In The Beginning

Earth’s Rotation and Revolution - . earth’s rotation – causes daily changes. the spinning of earth on its axis –

Shaping the Earth’s Crust - . weathering and erosion. shaping the earth’s crust. the rocks and soil of the earth’s