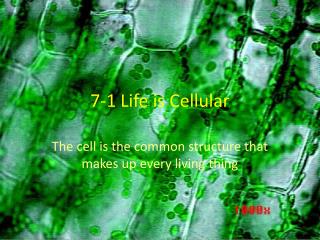 7-1 Life is Cellular. The cell is the common structure that makes up every living thing. The discovery of the cell. Without the instruments to make them visible, cells remained unknown for most of human history. Early MIcroscopes. 7-1 Life is CELLULAR - . federoff. key questions. what is the cell theory? how do microscopes work? how are prokaryotic

Chapter 7-1 Life is Cellular - . early microscopes. robert hooke -1665 looked at a thin slice of cork , from the cork oak

CHAPTER 7 SECTION 7.1: Life is Cellular - . robert hooke: discovered cells in 1665 looked at cork with a microscope.

7-4 The Diversity of Cellular Life - . all living things made of cells but… organisms can be very different. image

Life is Different. It is inherited Oberwolfach March 7-1 2018 - What is different about life? why do life sciences