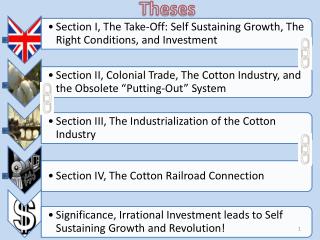 Theses . Connections to Over-Arching Thesis . Section I & II: The right conditions allowed for the expansion of several markets, including the cotton industry which led to remarkable mechanization and profits. Theses - . should be: specific clear (not too wordy) argumentative analytical defensible (something you can back up with

Theses and Dissertations - . structure : how to jam in all that information. organization of theses. standard structure

Quality Literature Theses - . a good literature thesis not only introduces the subject or topic of your paper, but also

Claims and Theses - . ashley, kourtney, mckayla , ryan. the claim versus the topic. topic - general subject of a writing

The basic theses: - Influence of climate change on desertification and degradation of soils in tajikistan boymurodov