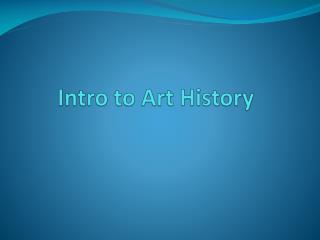 Intro to Art History. Art History. A. Art History – focuses on recreating social, cultural, and economic contexts in which an artwork was created 1) Goal of art history -> understand the artwork and its meaning B. Art history is not definite! Intro to Art - . an artist is a person engaged in one or more of any of a broad spectrum of activities related to

Intro to Ancient History - . 11: what is history for?. discuss…. ‘ hegel remarks somewhere that all facts and

Intro to World History - . “b.c.” stands for “before christ”, or the time period before the birth of jesus

Intro to Art of Programming - B smith: slightly long. score 3. b smith: 8/24/05: steps are not small enough. introduction

Introduction to Art History - . what is art?. marcel duchamp, fountain , porcelain and black paint, 1917. is this art?.