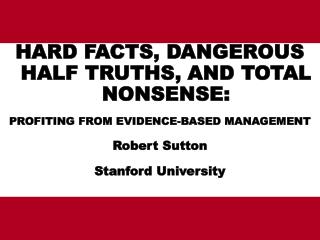 HARD FACTS, DANGEROUS HALF TRUTHS, AND TOTAL NONSENSE: PROFITING FROM EVIDENCE-BASED MANAGEMENT Robert Sutton Stanford University. Why We Need Evidence Based-Management. Three reasons that convinced us the time was ripe. IMPETUS #1: REACTIONS TO THE KNOWING-DOING GAP. 2 Truths and a Lie - . on your index card write your name at the top write 2 true statements about yourself write 1 false