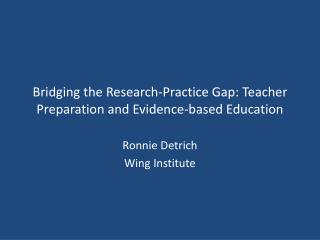 Improved Gastric Emptying - . whey-based formulas are associated with improved rates of gastric emptying when compared to

Evidence-Based Practice - . what is it &amp; what do we do with it? barrett johnson cwda child welfare conference

Bridging the Science / Practice Gap: The Promise and Perils of Evidence-Based Treatment - . wiphl 3/08. suppose you had a

How do you know? Claims and evidence in teacher preparation - Mari pearlman * pearlman education group llc *

Building an Evidence-based Practice - . to build an evidence-based practice. cultivate a spirit of inquiry (clinicians

How can we inform our teaching with evidence from education and psychological research? - Evidence into practice. how can

Evidence Based Practice University of Utah - . training school psychologists to be experts in evidence based practices