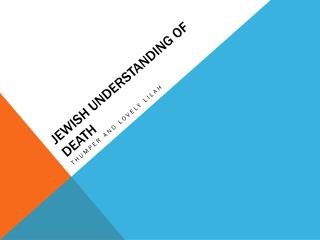 Jewish Understanding of Death. Thumper and lovely lilah. Understanding of death. The afterlife is a fundamental belief of Judaism. Death is a birth from the womb of earthly life into the new life of the afterlife. In death Jews meet their own personal Messiah.

DEATH - . by evan mach and mike lallier. “the two adults were no longer alive…but the third rope was still moving;

DEATH &amp; DYING - . what actually is death?. death is the ending of all vital functions or processes in a living

Death - . inevitable no, you are not invincible yes, even at your age, people die example binge drinking and alcohol

Death - . and the afterlife. what the materialist believes. only the body exists (no soul) we are the body when the body