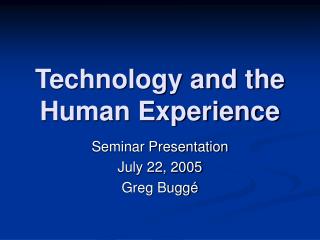 Technology and the Human Experience Technology and the Human Experience

Overview: Human Performance Technology (HPT) Roy Knicley, CPT - . about human performance technology…. what is it? why

What is Technology ??? - . is a saw an example of technology?. what does science have to do with technology?. does

Introduction to Technology - . course 8481 9 weeks 6 th grade. explanation of technology. the practical use of human

A Minnesota Human Rights Education Experience - . what are human rights??. human rights are the rights a person has

What is technology? - . more than just computers! includes engineering and design “human innovation in action”. why