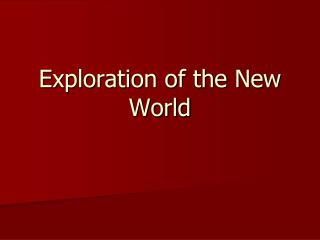 Exploration of the New World. The Northwest Passage. In the 1400’s there was a great demand in Europe for silks, spices, and goods from Asia. Europe wanted to find a new trade route traveling west from Europe. Where is Europe? What countries are in Europe? Where is Asia? Exploration and Exploitation - . objective. describe the role of mercantilism and imperialism in european exploration and

European Exploration - . what did europe want?. spread christianity gain territory get rich. a map of the known world,

AGE OF EXPLORATION &amp; COLONIZATION - . * during the late 1400s, four nations began looking for new routes to the