WHICH ONE IS THE BIBLE ? - PowerPoint PPT Presentation 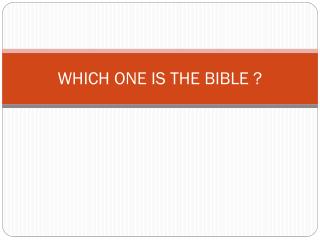 WHICH ONE IS THE BIBLE ?

WHICH ONE IS THE BIBLE ?

The Big Picture of the Bible part 1 - . assistance from the book written by kenneth w. craig.

How We Got the Bible - . part one: from moses to the canon part two: from jerome towycliffe part three: from erasmus to

The Uniqueness of the Bible - . unique one and only different from all others having no like or equal one of a kind our

Heroines of the Bible “Judith” - . a lesson by bishop andy c. lewter, d. min. introduction. this story comes to us

What is the Bible? - . chapter 1. what is the bible?. though the bible is made of many books, the bible tells one story

The Uniqueness of the Bible - . fulfilled prophecy. unique—“one and only, single, sole; differ from all others;

Where did the Bible come from? How do we know the right books are in the Bible? - The trustworthiness of the scriptures.

The Bible - . which statements are true about the bible?. a) one old guy named moses wrote all of it b) women were banned