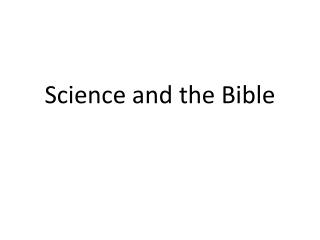 Science and the Bible

Science and the Bible. Pseudo-Science. 1 Timothy 6:20 O Timothy, keep that which is committed to thy trust, avoiding profane and vain babblings, and oppositions of science falsely so called: The Bible, 2,000 years ago, anticipated ‘bad’ science. Science means knowledge.

Science and the Bible

How Does Science Confirm the Bible? - . brian forbes fromnoahtohercules.com. what is science?. historical definition

Hermeneutics: The Art and Science of Biblical Interpretation - Comunicación y gerencia. hermeneutics: the art and

Creation and the Bible: An Exegesis of Genesis - . views on creation. in evangelical christianity, there are two primary

Is the Bible - . scientifically correct ?. 3 views of bible. 1. human document 2. not entirely the word of god 3. all

Evolution vs. Science &amp; the Bible (Lesson 7) - . part i: the age of the earth part ii: dinosaurs. age of the

Proof that the Bible is the Word of God - . overview. the bible’s claim 3 types of evidence archeological scientific

Bible Narrative Part 6 - . 40 days in the word. genesis introduced . good – choosing the other choosing god and

Why the Bible? Part Deux - . hard questions if god is so good, why is there so much evil in the world? if following

“Has Science Disproven the Bible?” - . flat earth. (job 26:7) he stretches out the north over empty space; he hangs

The Qur’an and Science - . contradictory or complementary?. outline. what is the qur’an? the qur’an and modern