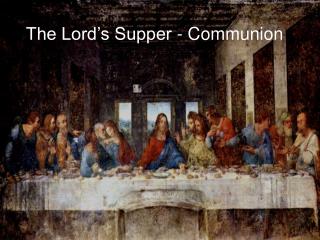 The Lord’s Supper - Communion. The Last Supper Painting. Painted by Leonardo da Vinci Not a photograph or painting of the real table and disciples at Pesach. In the Renaissance John was considered a younger disciple and was painting a young boy.

THE ANGLICAN COMMUNION &amp; THE EPISCOPAL CHURCH - . where are we headed? reflections of the rev. dr. warren e.

Last Supper - . now we must take a look at the paschal mystery on a much closer levelthe first step/ event in this

Observing the Lord’s Supper - . we could use for our title, “partaking of the lord’s supper,” or “celebrating

Holy Thursday - . the last supper of our lord. translation of the gregorian melody heard with this slide show ( entrance

Observing the Lord s Supper - The lord's supper is a ritual, in that it is a sequence of events that the lord gave

Observations Regarding The lord s Supper - Background. we are products of our environmentbeliefs/knowledge are passed on

LITURGY OF THE EUCHARIST - . parts. preparation of the gifts eucharistic prayer the lord’s prayer sign of peace

“Lord, is it I ?” “The Living Last Supper” - Who betrayed jesus? did we all?. fort lee chapel community

The Bread of Heaven in a Technological World The Lord’s Supper as Sacrament - John 6:35,

Prayer Songs Offering Bible study Lord’s Supper Announcements Prayer - . by this we know that we are in him: the one